The Travis Scott Astroworld concert tragedy was tragic and completly avoidable.
If you or someone you know was effected in a negative way the Cochran Firm Texas would like to talk to you.
You may qualify to join the growing list of people seeking justice on this matter.

Two security guards, Samuel and Jackson Bush, an uncle and nephew who worked security during the event, held a news conference in front of NRG Park along with their Attorney, Larry Taylor.
Both men have filed a lawsuit, Samuel Bush broke his right hand and injured his back as the crowd got out of control at the event that resulted in the death of 10 people. Bush said he was “physically overwhelmed by the crush of the crowd.”

KPRC Click2Houston
Two security guards who say they were injured during the deadly Travis Scott Astroworld Festival announced that they have filed a lawsuit against a number of parties, including the security company who hired them.

Samuel and Jackson Bush, an uncle and nephew who worked security during the event, held a news conference in front of NRG Park. The men, who are both from Houston, were accompanied by their attorney, Larry Taylor.
According to Taylor, Samuel Bush broke his right hand and injured his back as the crowd got out of control at the event that resulted in the death of 10 people. Bush said he was “physically overwhelmed by the crush of the crowd.”


“It was just overwhelming. I was trying to help out as much as I could and I wound up getting hurt. I reached my shoulder to her to grab around me so I could try to lift her up and slide her out, but as much as I tried, I could not get her,” said Samuel. “It made me feel less than a man knowing I couldn’t help, and then, later on, knowing many people died.”
Jackson said he suffered shoulder and back pain, as well as, emotional trauma as he watched CPR being performed on concertgoers. According to Taylor, Jackson pulled a deceased concertgoer out of the crowd.
“As far as training, there was no training. The plan just wasn’t executed the right way,” said Jackson. “I was so sore because I had helped out guys bigger than me and I found my uncle and I told him I just can’t.”
Among other defendants, attorneys for the Bush’s have named New York-based AJ Melino & Associates, the global security company that hired both men, for “failing to provide a safe workplace and any basic training.”

Asked about the conditions -- including a lack of walkie-talkies and limited communication between the security teams -- Jackson said, “It all seemed weird. I was just trying to keep my professionalism and just do the job.”
Jackson told KPRC 2 that the teams were just “thrown out there” and that it was “just planned to go that way.”
Taylor said the security teams were not instructed on-site and just signed their name on the day of the festival.
“You would think it would take more than just signing your name,” Taylor said. “At least an ID, at least the day before, coming through, walking through, seeing what you needed to do so everyone knew their assignment, everyone knew each other. None of those things were done. It was as simple as you and I meeting up now, and walking on the other side of this gate, and we’re supposed to secure the park. Secure what? Secure where? Secure who? None of these things were provided to these gentlemen and it seems as if they just wanted bodies -- more so than to actually secure.”
Jackson said he worked about 16 hours that day and received a fraction of what he should have been paid.

Travis Scott has been hit with a lawsuit by two security guards who worked at the 2021 Astroworld Festival, where 10 people died and over 100 others were injured during a crowd surge that pushed concertgoers near the front of the stage, ultimately crushing them. 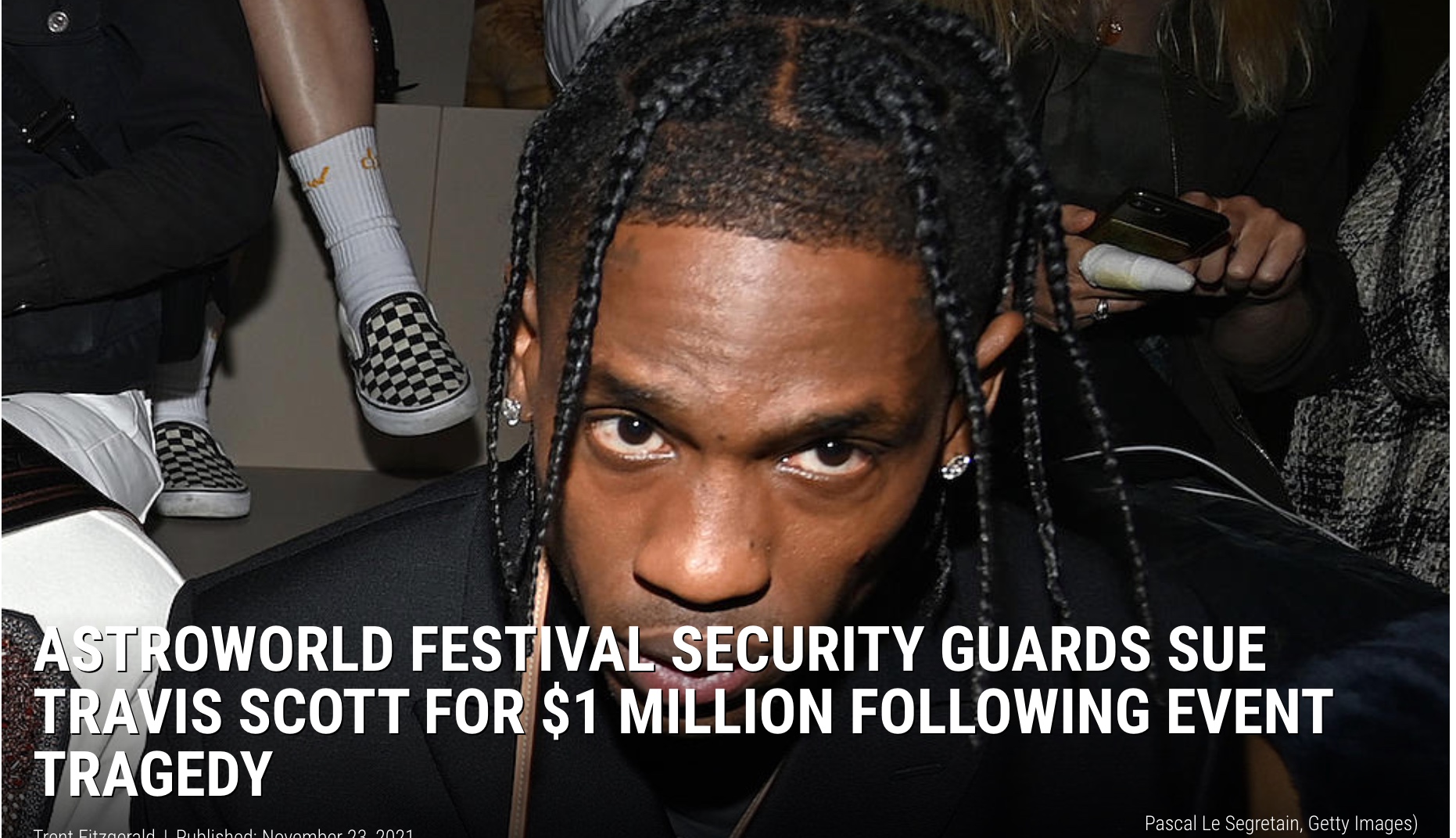 See the full article from XXLmag.com.


“There Was No Training”: Astroworld Security Guards Sue After Tragedy


Two security guards who worked Travis Scott’s Astroworld Festival in Houston are suing two weeks after a brutal crowd rush at the concert killed 10 people and injured hundreds of others, including the guards.

Samuel and Jackson Bush, an uncle and nephew who worked the fest on Nov. 5th, told reporters during a press conference Monday that they both sustained injuries trying to help concertgoers during the crowd surge. Samuel, who says he was trampled multiple times, broke his hand and hurt his back, while Jackson hurt his shoulder.
See the full article from Rolling Stone Magazine.

Please share this page with anyone you know who was negatively effected by this tragic event.

If you've been a victim of a dog bit.